Ankara, 20 September 2021 – The program which applies systems thinking as a methodology on climate change and environmental issues, utilizes a simulation game known as “World Climate” as a tool. Further, the program was implemented for the first time in Turkey with the participation of eighth grade students at Darüşşafaka Secondary School in Istanbul at the end of September.

System Thinking Association, Darüşşafaka Schools and Boğaziçi University, which are the implementation partners of the new initiative supported by the United Nations Development Program (UNDP) Accelerator Lab Turkey, provide students with a learning experience where they can understand the structure and functioning of the climate system for the first time in Turkey. The project is expected to provide a simulation environment where students can take a position as a decision maker in policy development regarding climate crisis and action.

The aim of this initiative is to raise awareness and offer solutions to global problems, including climate change, throughenvironmental education. The initiative aims to show that the climate problem is also a problem of inequality and that sustainable solutions can only be achieved with a holistic perspective.

Accelerator Lab's initiative will shed light on the future by adapting a decision-making simulation and systems thinking method to education, which was selected as a finalist and awarded with piloting support under the UNDP Social Innovation Challenge earlier this year.

Systems thinking, which offers a new language in understanding how the world works, enables us to see the parts of the whole and the network of relations simultaneously. Systems thinking also tries to reveal the structure that creates change by questioning howevents form over time. Thus, it supports the formation of a holistic perspective instead of heavily segregating the different artificial fields.

According to UNDP Turkey Accelerator Lab, Head of Exploration Gökçe Tuna “Systems thinking is an essential tool for understanding and taking action on the climate system and the climate crisis.” She further added that “What needs to be done in order to overcome the obstacles to the mainstreaming of this tool is to develop this approach at a young age. For this reason, we want to support both systems thinking and climate &environmental education to be a part of formal education.”

The first education to be given at Darüşşafaka Secondary School will start as an after-school activity at the end of September and will continue until December. After the initiative is transformed into a training program in the field of climate change, the outputs will be shared with educators and education researchers.

“We want to ensure that systems thinking education, which we developed under the guidance of the Systems Thinking Association (ESD) last year, is widely used in our school and applied in different disciplines.” Darüşşafaka Schools R&D Coordinator Meltem Ceylan Alibeyoğlu said, “We aim to promote this program on climate change to the whole country in the long run, together with our partners.” she adds. 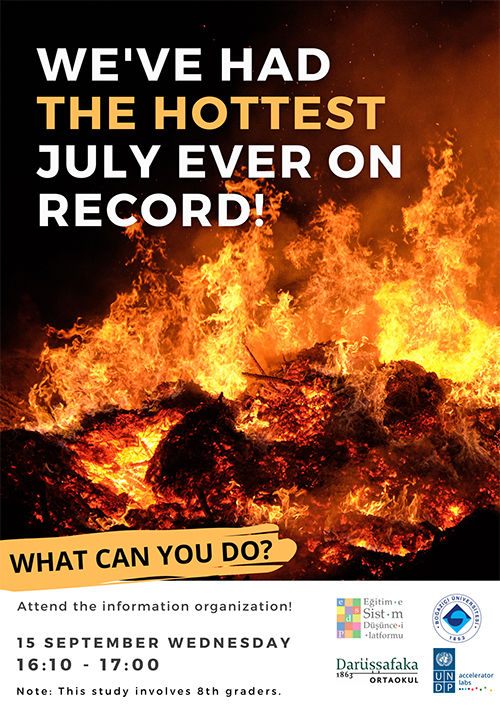 In the first phase of the three-stage training, the size, changes and relations of population, migration, economy and greenhouse gas emissions will be examined at both country- specific and global level by using systems thinking tools.

In the second stage, students will play the "World Climate" simulation game developed by Climate Interactive and adapted into Turkish in cooperation with the System Thinking Association (ESD) and Change for Climate. The simulation game is based on playing the role of an international climate negotiator.

In the third and final phase of the initiative, a comprehensive training on climate change will be given and the problems will be analyzed within the framework of the Sustainable Development Goals. The purpose of this analysis phase, in which systems thinking tools will be used, is to see the structure that creates the problem.

“The problem of climate change is not just an environmental one and it is not possible tosolve it solely with this isolated approach.” says Emre Göktepe, Chairman of the System Thinking Association, "For transformation into sustainable societies, it is imperative that individuals and groups be system thinkers as well as decision-makers who determine policies in the long run." he adds.

Bogazici University Faculty Member Dr. Gaye Defne Ceyhan MacLellan also added that, “With this initiative, we aim to create a simulation environment where secondary school students can understand the complex nature of climate change through systems thinking and evaluate its economic, social and political dimensions with the World Climate game. We think that the study will set an example for data-based decision-making processes in the field of education.”

As we enter the last nine years to fulfill the Sustainable Development Goals adopted by world leaders in 2015, integrating climate action, which is among its goals, into education systems is one of the critical steps for achieving sustainable development. Understanding the causes of climate change, the interactions between different factors and their effects forms the basis of developing a holistic perspective to solve one of the biggest problems of our time, the climate crisis.