In N Kolay 44th Istanbul Marathon, 560 education lovers ran for the Darussafaka Society. Donations within the scope of the organization will continue until November 21.

The 44th of N Kolay Istanbul Marathon, which is the only marathon in the world to be run between continents, took place on Sunday, November 6th. In the organization, which witnessed a wide participation, the campaign “We Run to Help If It's about Education” initiated by the Darussafaka Society also attracted great interest of education lovers.

While Darussafaka Rhythm Group performed a percussion concert in Dolmabahce to support the runners, the Carnaval Turco team welcomed the runners with their lively rhythms in Besiktas.

“Step by step” to the 3 million TL target

More than 2.5 million TL has been donated so far to the "We'll Help If It's Education" campaign, which was initiated by the Darussafaka Society to support the educational expenses of 149 students who started Darussafaka this year. Donations within the scope of the organization will continue until November 21. 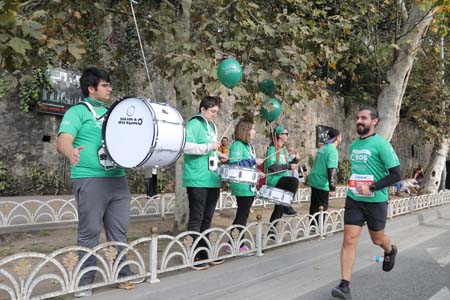 The Darussafaka Society Chairman of the Board Oguz Gulec thanked all the institutions and runners who took their steps for “Equal Opportunity in Education” and said, “Those who believe that education will change lives, have been with our students step by step since 2015. Education lovers create resources for the education of our students with the campaigns they run. The Darussafaka Society Chairman of the Board Oguz Gulec said, ‘’ As the Darussafaka Society, we are raising our children, who are the future of our country, as lifelong learners, adopting universal values, self-confident, aware of their responsibilities towards their country and society, and equipping them with 21st century skills, as it has been for 159 years.”