Change of Seats in Darüşşafaka Society

Ordinary General Assembly for the calendar year 2018 of Darüşşafaka Society was organized at Maslak TİM Show Center, on April 6, at 10:00. Talha Çamaş, who undertook the responsibility of Chairpersonship of Darüşşafaka Board of Directors since 2013 and whose term of office was completed according to the Charter of Darüşşafaka Society, transferred his duties to M. Tayfun Öktem (DŞ’82). In the general assembly, to which 162 people participated, 152 members casted their votes.

According to the charter of Darüşşafaka Society, an elected chairperson can assume the responsibility for two periods of three years at most. And with the last General Assembly held, term of office of Talha Çamaş, , who has acted as the Chairperson of the Board of Directors of Darüşşafaka for the last 6 years, has been completed.

The opening remarks of the meeting were made by 5th grade students of Darüşşafaka Schools, İlke Karakaş and Burhan Doruk Tokgöz. Stating that she has successfully passed the last year’s Darüşşafaka Exam in Istanbul, İlke expressed her feelings as follows: “One day I want to sit at the seats that you are sitting today, and I wish to lead the future of Darüşşafaka.”

Burhan Doruk Tokgöz, who has joined the Darüşşafaka Family last year, said: “We thank you all for keeping Darüşşafaka alive and being here today.” 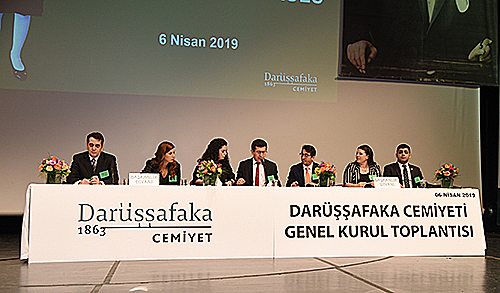 Çamaş began his words as follows: “Today will be the last time I, as the Chairperson of the Board of Directors, address to you and give account to you, our esteemed Society Members. Today, I will be completing this duty, that has been entrusted to me by the General Assemblies and Board of Directors, and that I have performed with utmost honor, pride and joy. At this moment, as always, I feel that the five idealist young Ottoman administrators, who had built this holy nest, this unique institution 156 years ago, are listening to us.” Stating that he has worked with 40 board members for six years, Çamaş said: “One of the most important and correct decisions that the Board of Directors, which began its duty in 2007, came up with, was limiting the term of chairpersonship to 6 years.”

Stating that he is taking the “Söz Veriyoruz (We Promise)” manifesto issued by the Darüşşafaka Yeniden Hareketi (DYH) as a reference book, Çamaş indicated: “We have toiled to carry the recognition and trustworthiness of our Darüşşafaka to the highest point it should be. Our motto has always been teamwork and shared wisdom. The commissions formed as our charter decree worked actively, and the commissions empowered with the members outside the Board of Directors worked so as to build the infrastructure of the most important decisions of the Board of Directors. All activities, from personnel recruitment to working times,were implemented with unbiased criterion, and performance evaluations were conducted in a merit-based system.”

Declaring “We shall always feel grateful towards Türkiye İş Bankası, which has been on the side of our students with the “81 students from 81 provinces” project that has left 11 years behind”, Talha Çamaş thanked Türkiye İş Bankası. Following the remarks of Talha Çamaş, a short film, that summarized the past 6-year period, was viewed.

After the speech of the Chairperson of the Board of Directors, Talha Çamaş, the Treasurer of the Darüşşafaka Society, Cem Şipal (DŞ’82), disclosed information regarding the 2017 Budget, Income-Expense Accountings and Financial Tables.

Following the presentation by Cem Şipal, Q&A and suggestions session began. Taking the floor after the members, Bülent Topbaş (DŞ’88) clarified each and every question.

After the debates, the Chairperson to the Council, Morbel, voted discharging the members of the Board of Directors and the Supervisory Board. The members were discharged unanimously.

As a result of the voting, the list of M. Tayfun Öktem was chosen as the new Board of Directors.