In 1863, five young men set out to create opportunities for fatherless children who were not able to obtain a high-quality education. This journey has improved the lives of thousands of children. Below we introduce these five noble individuals. 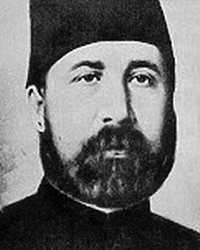 He was born in 1825 in Aksaray, Istanbul. He improved himself in accounting and mathematics. Author of significant works such as "Muhtasar Kavaid-i İlm-i Hesab" and "Mukaddime-i İlm-i Cebir," Yusuf Ziya Pasha also wrote a book called "Teshil-i Hesab" which, for a considerable amount of time, was a popular textbook used in military schools. In 1842, he started working at the Treasury Expenditures Department of the Military Office. In the war with Russia in 1852, he was assigned as the Examining Official for the Imperial Army of Batum (Batumi). He was promoted to First Examiner for the Clerkship of Seraskier's Porte, and in 1864, promoted to the post of Secretary. In 1867 he was appointed Seraskier Counsellor, and in 1868 Finance Counsellor and later to the Ministry of Finance. He was chosen in 1873 as a Member of State Council and later served at the Ministry of Forestry and Mining. That same year, he was assigned to the Ministry of Finance and acquired the positions of vizier and marshal with the Ottoman Badge of First Degree. In 1874, he became the Minister of Finance. He was appointed as the Minister of Land Registry and Cadastre and then again as the Minister of Finance. In 1878, he was appointed Governor of Trabzon. He died in 1882 in Trabzon. His remains were later transferred to Zincirlikuyu Cemetery. 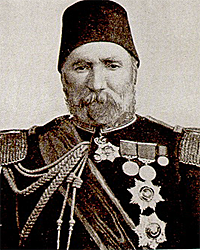 He was born in Vidin in 1832. He completed elementary school and high school in Vidin. Moving to Istanbul, he enrolled in military school. After first receiving some education in painting, he then focused on mathematics. After completing his education, he was appointed to the Military Academy as a teacher of algebra (he is still regarded as one of the world’s first scholars to write books in Linear Algebra). He served as a maths and astronomy teacher at Darülfünun. In the same period, he was appointed to Tophane Experiment and Examining Commission. In his time, he was considered the best of Ottoman mathematicians. He was sent as vice principal to the Ottoman Academy in Paris in 1868, returning after being appointed to the Imperial Engineer Training School. In addition to being the President of Chief Armory Assembly, he was also appointed as a member of the Commission for Public Works in 1879. In 1882 he was appointed to Washington as Mid-Ambassador and chosen as a Member of Military Inspection Commission in 1885. In 1886, he was sent to Germany to examine mauser rifles. After returning to Istanbul, he served at the Ministry of Commerce and Industry. Subsequently, he was appointed to the Military Inspection Commission, the Court of Accounts and for a second time, to the Ministry of Finance. He taught mathematics at Darüşşafaka. He died in 1901 in Istanbul. 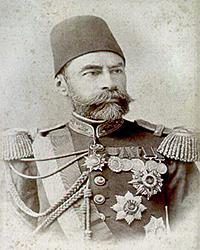 He was born in Bursa in 1839. After completing Bursa Military High School, he went to Istanbul and completed his education at the Military Academy. He graduated with the first degree at the academy and became a Staff Captain.

Due to his success against the Arab revolts in Yemen in 1871, he was elevated to the rank of Marshal at the young age of 33 and later became the governor of Yemen. He subsequently served at Shumen, Erzurum, Bosnia & Herzegovina and Montenegro. Just before the Russo-Turkish War of 1877-1878, he was appointed the Chief Commander of the Caucasian Front by Sultan Abdulhamid II. After the war, he served in various positions such as the Manager of Chief Armory Assembly, the Governor of Monastir, and the Investigator of the Third Army. Consequent to his tremendous success at the Russo-Turkish War of 1877-1878, be became a field marshal and was appointed Chief Commander of the Anatolian Army. He subsequently became the Chief of General Staff and also served as the President of the Ottoman Assembly of Notables. In 1912, he was appointed Grand Vizier. Also a scientist who wrote books on history, astronomy and geography, Ahmet Muhtar Pasha died in 1919 in Istanbul. His grave is at the Burial Site of Fatih Mosque. 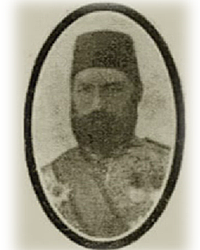 He was born in Chios in 1828. He served in various positions within the Ottoman government. He also worked at the then-Ottoman Embassy in Paris. Following his return from Paris, he joined Darüşşafaka Society. Agreeing to establish a great school with the other founders, he proposed that this school (including the school layout, uniforms, and curriculum) should be similar to Pritanée Militaire de la Flèche, a boarding school near Paris - exclusively for orphans - which he observed and studied. His proposal was approved by other founders and thus Darüşşafaka was established. During the great "Draught of 1290" (Julian Calendar) when he was serving as the Governor of Konya in 1873, he attracted the attention of Sultan Abdülaziz through his joint efforts with Mahmut Sadrettin Çelebi, the Chief of Konya Mevlevi Order, to "assist the desperate and hungry people." As a reward for his efforts, he served for two periods as grand vizier from 15 February 1873 to 15 April 1873 and from 26 April 1875 to 26 August 1875. In 1875, he was appointed Governor of Izmir for a short time. He died in 1875 in Izmir. 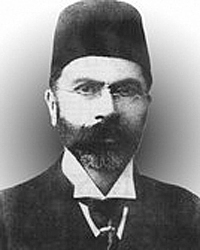 He was born in 1836 in Trabzon. He continued his education in Istanbul. He studied maths, geometry, algebra and astronomy classes with prestigious figures such as Yusuf Pasha, Hikmetçi Derviş Pasha and Vidinli Tevfik Pasha. He served as an instructor at the schools of Islamic Educational Association, which also contained Darüşşafaka where he also assumed the duty of Principal. In 1880 he established a private high school called "Mekteb-i Hamidiye" in Trabzon and became the school’s first principal. In 1887, he served as the first principal of Trabzon Civil Academy. He was a pioneer in introducing sports into the curriculum. He taught classes at the El-Ezher University of Egypt and also served as an instructor for the Hidiv family.